I’ve been wanting to shoot some Portra 800 on my Canon AE1 for a while now, mainly inspired by some beautiful results that I’ve been seeing from this film stock in 35mm from my work scanning clients’ film in my lab. Recently I was able to combine this with another mini ambition, to take a walk around the gardens at Chatsworth House in the winter sunshine. It is one of my favourite places to wander around and take photographs, and it’s worth taking a trip in each season, as there is always something new to see. The foliage, flowers and light are ever changing throughout the year, and there are so many different elements and areas to the garden that it always feels a little magical to me; as though an adventure could be waiting around every corner. The gardens are closed for several weeks in the new year, so this particular visit took place only a couple of days before Christmas. Most of the other visitors seemed to be enjoying the seasonal decorations in the house, or shopping for festive presents in the gift shops, because the gardens were relatively quiet.

The last time I shot with my AE1 was back in June, also on a walk around Chatsworth gardens, and unfortunately I was a little disappointed with my results, as I missed my focus on some of my favourite shots, and my choice of Superia 400 contributed to some slightly over-saturated images. So I was slightly nervous about this little expedition. However, I tried to learn from my mistakes, taking plenty of time over my focusing, and I’m so delighted with the results. Some of these lighting scenarios meant that shots could have been badly affected by flare quite easily, but I chose my angles very carefully, and the combination of lens, film and camera has handled it with great success, with a little extra work in post-processing to deal with some of the effects of the flare. Portra 800 in 35mm has an amazing way of capturing the soft winter light, particularly the dusky, dreamy backlighting and I love the way it has rendered the beautiful natural detail in these scenes with wonderful clarity and richness of colour.

If you’d like a little more detail about the places these images were taken, I’ve included it at the bottom of this post. All images were shot by me (expect the shots of me, taken expertly as always by my husband Chris) on the Canon AE1 with the Canon FD f1.8 lens and Kodak Portra 800, developed and scanned back at UK Film Lab. 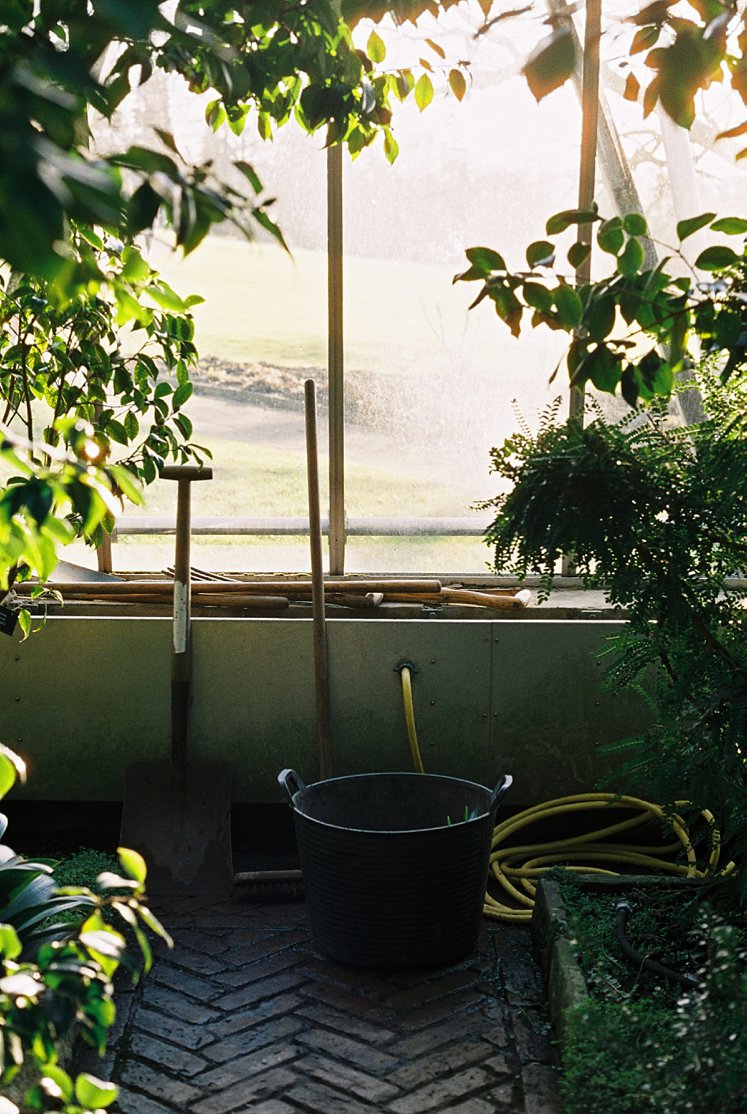 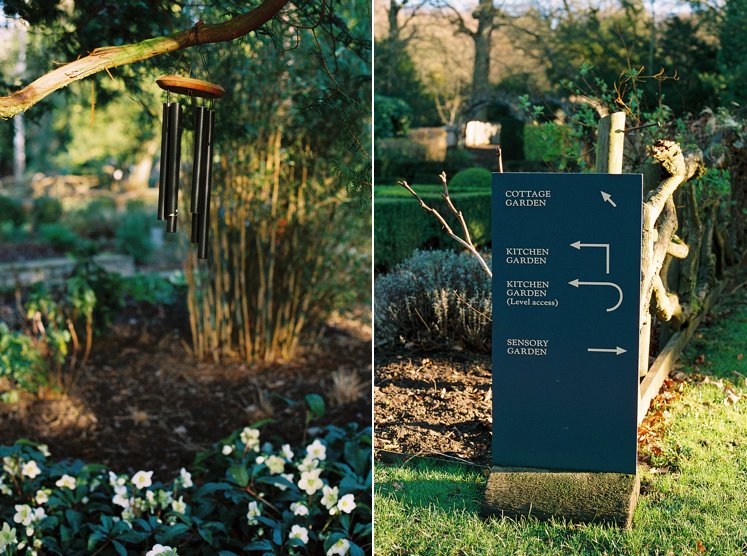 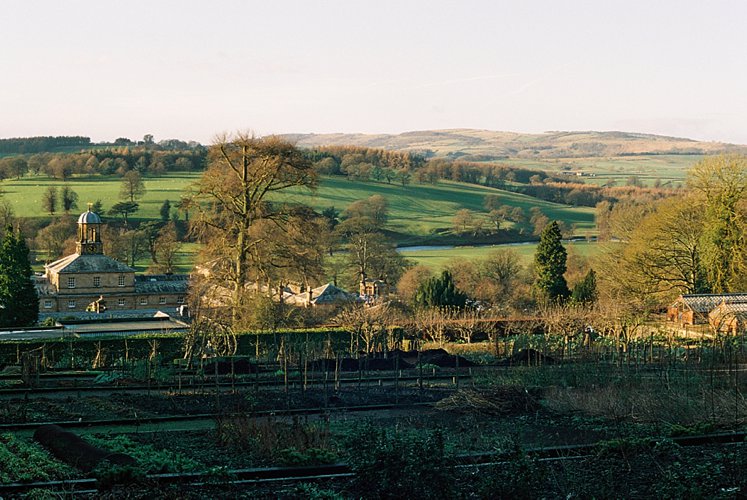 Notes on the locations around Chatsworth House gardens:

My first shot was taken in the display greenhouse, which was constructed in 1970 and is divided into three different temperature zones: temperate, mediterranean and tropical. Moving on from here is where Chris and I usually split up…I like to pay a visit to the sensory garden while Chris aims for the kitchen garden, and we meet up at the latter after our little solo wanders. The sensory garden was created in 2004 and is designed to include different sounds, textures and smells for people to enjoy. I only explored this area properly for the first time a few visits ago but I find it very beautiful, and I like to think that it can be enjoyed by people with visual impairments. It’s so peaceful and there are usually very few other people around; I often have it to myself. I approached it through a beautiful shady collection of pines, where the light then comes falling through from the wide, open lawn beyond. Walking around on this visit I particularly enjoyed the rustling bamboo and pretty tinkling of the wind chimes, which were hanging above clumps of hellebores.

From the sensory garden it is a pretty walk to the kitchen garden, up through the cottage garden and along a path that in spring is surrounded on all sides by daffodils and in autumn is overhung by the vibrant orange foliage of acers. The kitchen gardens are quite extensive, and they range up a slope that affords a beautiful view down to the stables and out over the countryside of the Peak District beyond. They are a true treasure trove of colour throughout the seasons, and along with the brilliant stalks of chard and beetroot, the tomatoes, berries, apples and other fruits, it is also home to dazzling floral displays, with breathtaking peonies in spring and colourful dahlias into the autumn. The kitchen gardens are also home to a collection of elegant greenhouses, which you can see in the sixth image. The seventh image is of a lovely little shed structure that we always enjoy visiting, though I’m not completely sure what its purpose is!

Moving on, we exit the kitchen garden and weave our way past the summer house. The next part of the walk is one of my favourites. Once again, its appeal changes but never diminishes throughout the seasons. It is a long, mainly straight path called the Green Drive, which follows the shallow trout stream. This area was apparently the main source of inspiration for the winning 2015 RHS Chelsea Flower Show entry, the Laurent Perrier Chatsworth Garden. On this visit the blue-tinted shade underneath the trees overhanging the stream was lovely, and inspired me to take the eighth photograph in my blog post. The path passes the back of the Cascade Pond, the One Hundred Steps, and the Grotto, which is where I took my first portrait of Chris on this trip. The background for this shot perhaps looks a little uninspiring, but the giant Gunnera leaves that are rotting away in their winter state behind him, are something he often likes to photograph when they are looking at their spectacular summer best, so it seemed like a fitting location! The Grotto itself, which overlooks the beautiful Grotto pond and casts reflections in it on a still day, was built in 1798 for Georgiana, the famous wife of the fifth Duke of Devonshire.

Right next to the Grotto is possbly our favourite area, the Pinetum. What a special place! With a magical, airy, untouched quality to it, I’d say that it probably reaches the height of its beauty in winter. This is a place that gives me so much inspiration as I strive to capture the dazzling, dreamlike glow of winter sunshine that seeps through the pines as you round the first corner, or the golden hues that the light brings out in the bark of the redwoods. The Pinetum – which hides away in the farthest reaches of the garden – also affords beautiful views over the ha-ha to the parklands of Chatsworth.

Often we follow the trough waterfall down from the Pinetum but on this visit we strolled through the area originally created as an arboretum, but which one would probably mistake for a natural collection of varying shrubs and trees. This is where I photographed the delicate clinging veins of ivy on the tree trunk, along with the beech tree surrounded by its fallen foliage, and the pretty spray of winter blossom. From here we walked alongside the maze and enjoyed a walk around the Strid pond as the evening approached. I love how the photograph has captured the last wintery rays before the sun dips below the horizon. We took a brief detour from here to see one of my favourite (but silly!) sights in the garden, the squirting willow tree, and then we came out onto the Salisbury Lawns, which sweep down magnificently to Chatsworth House itself and also overlook the Derbyshire countryside all the way to distant Stanage Edge.

The path down to the Broad Walk – which leads to the garden gate – is lined with statues, which seem to look their best when struck by golden evening light. This path also seemed like a nice spot for my second portrait of Chris. We paused at the cafe to pick up a warming mince pie and hot chocolate on our way out, and then I finished up my roll of film with the portrait of the chap playing the pipe organ in Flora’s Temple. The organ player was there when we arrived, and he was just winding up his Christmas show when we were leaving, three hours later! I never know where the time goes when we visit the garden at Chatsworth…it’s like a beautiful, magical little world of its own and I just love exploring it.

no comments
link to this post
email a friend